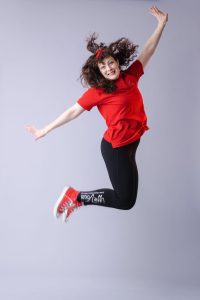 Jess has been principal of Little Voices Mid Kent since May 2019 when she launched her first centre in Maidstone, Kent.

Jess trained in music and performing arts from a young age. After achieving her A-levels in music and dance she attended The Academy of Contemporary Music in Guildford where she attained her BA in Music Performance specialising in technical contemporary singing. She then went on to attain her IDTA Musical Theatre Diploma and more recently has spent the year at The Centre Performing Arts College attending vocational training in dance, drama & singing and training as a dance  teacher.

Alongside teaching Jess has also been performing professionally since the age of 17 and at a variety of prestigious venues including the Royal Albert Hall, British High Commission and Irish Embassy in Freetown, Sierra Leone.

Megan has loved performing since she was a toddler, following this passion through her school years & attending an extra-curricular theatre school at the weekends.

Moving to Brighton, she continued with both teaching and her studies, gaining a First Class BA (Hons) in Theatre Arts & Musical Theatre.

Her most notable roles include Molly Jensen in Ghost – The Musical, Ilse in Spring Awakening, & Elle Woods in Legally Blonde. Meg has also starred in some short films, performed at The Brighton Fringe Festival, in pantomime, and as a featured dancer at the ExCel Centre in London to name just a few of her credits.

Meg has always had an affinity and love for working with young people, and is dedicated to creating an inclusive & fun environment, celebrating & challenging each individual!